Warning: Creating default object from empty value in /homepages/35/d452175849/htdocs/clickandbuilds/TheSFDCGeek/wp-content/plugins/redux-framework/ReduxCore/inc/class.redux_filesystem.php on line 28
 Suggested Sources – The SFDC Geek 
Warning: count(): Parameter must be an array or an object that implements Countable in /homepages/35/d452175849/htdocs/clickandbuilds/TheSFDCGeek/wp-includes/post-template.php on line 275

What to read, who to follow, Groups to join and how to keep up with three releases a year!

Those who’ve been involved with the SFDC community for more than a day know that there’s a TON of information out there on all things Salesforce. Being an avid reader and consumer of geeky knowledge, I thought I’d share with the world a few People, (cyber) Places and Things that I found to be really helpful.

The (Kevin) Bacon of the SFDC Community

On top of all the SFDC stuff, Eric’s just an overall great guy. Open to conversation, insightful, down to earth and (in full Midwestern style) just plain old nice.   Hop over to his blog to read through his “Introducing” series where he asks people from the community six simple questions. Everything from “What does your job title mean to you?” to (my favorite) “Bacon or sausage?”

Eric can be found on Twitter, LinkedIn and his blog. While you’re looking around, especially if you’re from the Midwest, don’t forget to check out Midwest Dreamin’!

Looking for great tutorials, spot on app reviews and tips and tricks on getting certified? Look no further than Ben’s blog! I can’t tell you how many times one of his posts has helped me along.

My name is Ben McCarthy, I’m a Salesforce Jack of all trades and have held a variety of roles in my relatively short time in the Salesforce space including Support, CRM Manager,Business Analyst and as a Consultant. I am a Certified Salesforce Administrator, Developer and Sales Cloud Consultant. I graduated from Cardiff University in the UK getting my BSc in Information Systems. I have a keen interest in Business Systems and helping businesses save time and money through the use of new technology.

Ben can be found on Twitter, LinkedIn and of course on his blog.

Missy delivers these crazy good scopes (don’t know about Periscope? Check it out!) where she honestly tries (and succeeds) to help SFDC Admins. Missy was the 05/12/2016 guest on The ButtonClick Admin’s Podcast which, if you haven’t given a listen to yet, you really should!

Missy’s the creator and deliverer of something named the #AdminHour. What is Admin Hour? According to Mike Gerholdt’s write-up…

“(It’s) An interactive hour on Periscope dedicated to giving admins actionable content that they can implement immediately.”

Overall, Missy’s a great example of somebody whose heart is in the right place, is willing and able to help the community and happily does so.

Missy can be found on Twitter, Periscope and her blog. 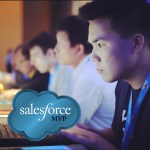 Ever wish you could pick a developer’s brain. You know, spend time talking with them so that you could garner just a smidgen of the vast knowledge they’ve acquired regarding things like writing Classes (and test Classes) or developing apps. David’s site’s tagline really does say it all: Finally, Apex tutorials for point-and-click admins!

While, yes, there is a paid version that’s much more in-depth and offers several benefits, the information David’s site offers for free is nothing short of GREAT! Here’s an excerpt from his “About Me” page.

It wasn’t easy to learn Apex, Salesforce’s proprietary programming language, but it should have been.  There was plenty of documentation online, but they were all catered towards people who already knew how to code.  I needed a website to help point me in the right direction – but that site didn’t exist!

That’s why I’m building SFDC99!  I want to help you, the non-coding admin, so you don’t have to go through the same needless struggles that I went through when I began.  It’ll still be a challenge, but now you’ll have a teacher to help guide you through your way.

David can be found on Twitter, Pluralsight and of course on his site sfdc99.com.


Warning: count(): Parameter must be an array or an object that implements Countable in /homepages/35/d452175849/htdocs/clickandbuilds/TheSFDCGeek/wp-includes/class-wp-comment-query.php on line 405


Warning: count(): Parameter must be an array or an object that implements Countable in /homepages/35/d452175849/htdocs/clickandbuilds/TheSFDCGeek/wp-includes/class-wp-comment-query.php on line 405